Dec 15th A Letter to My Boss, from Peru

I know you’re probably not going to give me my job back and that’s totally cool. Although, if you were to offer it back I would graciously accept it – and that’s cool too. I was hoping that, if you weren’t still angry about things, you could ask the Wisconsin State Police to drop any charges you have pending against me. I really need to get out of Peru and find my way back home!

Henry is doing fine so don’t go worrying about him. He seems much happier here, being back in his own country and all. I knew he would be happier here and that’s why I took him in the first place. He’s actually found love way up on the Huayna Picchu mountain! It’s so wonderful! I have a picture of the two of them together that would really melt your heart.

Actually, I’ll enclose that picture of Henry with this letter so you can show it to Linda. I figure that if she can also see just how happy Henry is here, she might just let bygones be bygones. On second thought, I had better keep the photograph. He doesn’t come down from the mountain anymore so this picture is basically all I have left of him.

Although Henry is doing quite well in Peru, I’m just not cutting it out here, Mr. Morino. I cry nearly all of the time! It’s much rainier in the jungle than what I expected and my missionary friend stopped allowing me to share his tent. Even worse, the monkeys have grown weary of me eating all their bananas. They’ve begun forming an actual monkey army; and I can tell by how quiet and secretive they get around me now that they mean to attack!

If you and Linda could somehow find it in your heart to forgive me, and then send me a plane ticket… well, I would be eternally grateful! Oh yeah, about your truck and trailer. I had no idea that river was going to be that fast and that deep! From the embankment, the crossing of it didn’t seem all that complicated. But don’t you think I didn’t do my best, Mr. Morino! You can ask anybody that knows anything about rivers in Peru, when that current takes you, and you attempt to manuever a truck and horse trailer off of a hundred-foot waterfall, there ain’t going to be nothing a person can do but swim out the wreckage.

Going back to that day I took Henry, I never meant for any of it to go down the way it did. First off, it wasn’t an animal abduction, it was a full-fledged animal rescue. That’s God’s honest truth! Now, I can’t lie to you and say your wife deserved all of what happened to her either, but we both did things we probably came to regret. Ever since that first day I came to work at Shear and Shave Llama Service, you and Linda were like family to me. I knew nothing about the business, but y’all poured your hearts and souls into my training and it showed! The day you promoted me from trim-wool technician to a full-fledged de-fleecer…that was the proudest day of my life – bar none!

But the day that Linda hired on Senor Juan-Know-It-All-Espinoza, everything went downhill from there. Linda said he naturally outranked me because he was from South America and that’s just not right. She’s stereotyping! To say just because somebody’s Peruvian, that they automatically know everything there is to know about the finer points of llama grooming… well, that’s plain ludicrous! Yet, I didn’t grumble. I never complained. I just went about my daily grind shaving those llamas to show-room condition. Oh, they would laugh at me and tease; but those techniques I use with the coddling and whispering really puts the animal at ease.

The daily taunting was relentless but I just bottled it all up inside. Like the devoted Sheer and Shave employee that I am, I just went about my business day after day and tried to pay it no mind. Unfortunately, there was a real rage brewing inside of me that even I could not contain. And then finally it happened, I just completely blew my top!

I was in the barn sculpting Henry’s backside with some hand shears when Linda asked me if I was trying to win myself a date. I reminded her that a good trim with hand sheers should take no less than twenty minutes, or the llama will walk away from the experience feeling cheapened. You taught me that one, Mr. Morales. It’s basic Llama Grooming 101! Juan then begins braggin’ about how he could do the job with a pair of electric clippers in less than five, and have the llama looking better and feeling far more satisfied! I argued with him then, I did because he had assaulted my honor. I told him that such a task in less than five minutes was impossible; furthermore, he wasn’t fooling anybody because I had seen his work. It was but second-rate sheep-shearing he did and he had always failed to shave completely down to the hocks.

So then Juan starts getting all boisterous and loud. He tells me he was going to show me a thing or two about his skills with a llama. I told him that he wasn’t touching Henry with a pair of electric clippers, and if he wanted something big to shave then Linda was standing right behind him. When I said that, Linda got all fired up and she snatched the clippers straight off of the sheering post.

I told them to back away from Henry because he was really starting to tense up. They wouldn’t listen and just kept coming my way. It was at that very moment I completely lost it! It was like my brain switched to autopilot and all I could see was red! When I finally came back to my senses, Juan and Linda were left naked, shaved, and duct-taped to the post just as you found them. As for me and Henry, well we were already well on our way to Peru! 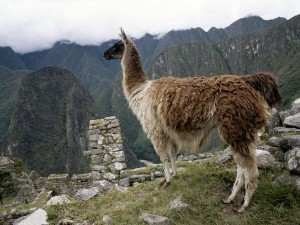 Picture of Henry in Peru

Anyway, I have get this letter to that missionary so he can get it in his mailbag before tomorrow. First thing in the morning, he’ll be off trying to make converts out of a bunch of cannibals. Don’t know if he’ll be returning back this way anytime in the near future. Think about what I wrote you and how most of it can be chalked up to a huge misunderstanding. I’m sure you can see things a lot clearer now that you’ve read my side of the story.

PS. Give my regards to Linda and tell her not to worry about her hair. It will all grow back, and if it doesn’t she probably looks better that way.

This site uses Akismet to reduce spam. Learn how your comment data is processed.