Jan 2nd Wisdom of the Wombat

The wombat is perhaps the most misunderstood creature in all of existence. Contrary to popular belief, this oddity of nature is neither a womba nor is it a bat. The so-called experts define the critter as a quadruped marsupial; but I doubt any of these so-called experts have ever been abducted by a clan of them, and then forced into hard labor deep within the subterranean turnip fields of Tasmania. 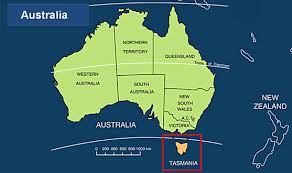 Like the kangaroo, wombats have a pouch in which to carry their young. Unlike the kangaroo, these mammal’s pouches are located on their backs.  This unique feature makes the creature an incredibly adept smuggler whom should be considered especially dangerous when boarding a plane alongside you. 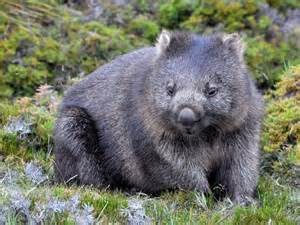 The Tasmanian Wombat (Submitted to the No-Fly List by US State Dept.)

Very limited knowledge has been gained about the world of wombats since Captain Guy Hamilton ran his ship aground on Clarke Island over two centuries ago. It was on that fateful day in February of 1797 when a rescue party aboard the salvage ship Francis first stepped foot on the Australian island in search of Hamilton and his lost crew. 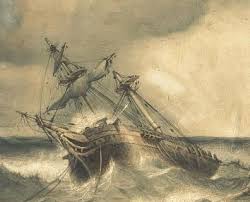 Unfortunately, Hamilton and his men were never seen or heard from again; however, history was made soon after when man and wombat stood face-to-face for the very first time on terra firma. A crewmember, Manny Flanders, recorded the incident in a journal. A recovered page found torn from that journal chronicled the commemorated event. 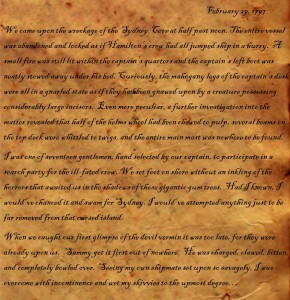 We came upon the wreckage of the Sydney Cove at half past noon. The entire vessel was abandoned and looked as if Hamilton’s crew had all jumped ship in a hurry. A small fire was still lit within the captain’s quarters and the captain’s left boot was still neatly stowed away under his bed. Curiously, the mahogany legs of the captain’s desk were all in a gnarled state to suggest they had been gnawed upon by a creature possessing considerably large incisors. Even more peculiar, a further examination of the vessel revealed half of the helms wheel had been chewed to pulp, several beams on the top deck were whittled to twigs, and the entire main mast was nowhere to be found.

I was one of seventeen gentlemen, hand selected by our captain, to participate in a search party for the ill-fated crew. We set foot on shore without an inkling of the horrors that awaited us in the shadows of those gigantic gum trees. Had I known, I would’ve deserted, chanced the shark infested waters, and swam for Sydney. I would’ve attempted anything just to be far removed from that cursed island.

When we caught our first glimpse of the devil vermin it was already too late; for they were already upon us like white on rice. Sammy got it first out of nowhere. He was charged, clawed, bitten, and completely bowled over. Seeing my own shipmate set upon so savagely, I was overcome with incontinence and wet my skivvies to the utmost degree… 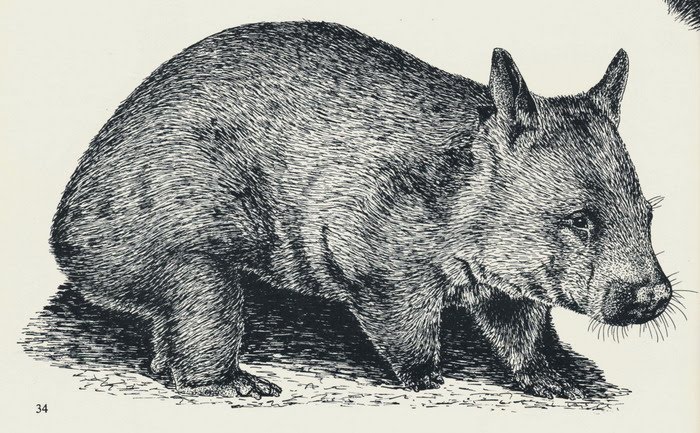 Illustration of wombat mourning her slain husband, in the aftermath of the infamous Marsupial’s Massacre (Harpo’s Weekly-1797)

There is no record of Manny Flanders ever surviving the battle which came to be known as the Marsupial’s Massacre. History tells us that only six of the seventeen-member rescue party ever made it back to Sydney. Those six were reportedly spared by offering the wombats several strands of beads and two kegs of beer in exchange for safe passage home. Eight of the seventeen-member crew were killed in mortal combat and three were taken captive by wombats; only to be sold into bondage deep within the subterranean turnip fields of Tasmania. 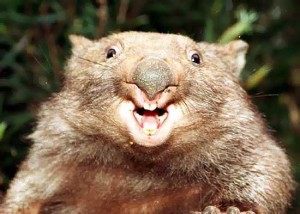 A face of pure evil?

So what exactly is a wombat? Honestly nobody knows. Some have recently suggested they were a predecessor of ISIS, albeit smaller and a bit less hairy. Perhaps the greatest source of knowledge surrounding this mysterious critter can be found within the ancient legends of Australia’s native folk- the Aboriginals. Their venerable bits of folklore, passed down from generation to generation, tell of the great furry ones who came up from burrows within the deep. Many of these archaic verses, recanted in Aboriginal poetry, hint to the origin of these creatures by describing them as one-part koala, one-part Ewok, and two-parts hairy leprechaun.

Although I would caution my readers not to take any needless risks, and to refrain from venturing into areas known to be populated by sinister wisdoms of wombat, I would very much encourage them to go and explore Australia –  The Land Down Under …and when you go, stay safe and don’t forget the beer and beads!

Thank you for reading my article and I hope you visit my site again real soon. Feel free to explore other areas of my blog, post a comment, and send some love on social media.