It’s just not the safe thing to do.

Since you can’t see your feet,

and at the very least, blow out a shoe. 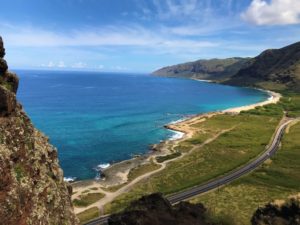 The view from the upper Makau Cave.

You really shouldn’t even wander that far.

which would ruin your day,

’cause you left all your snacks in the car. 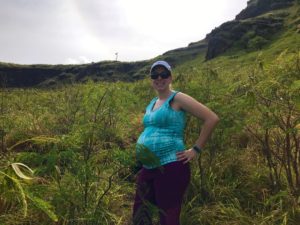 and be miles away from a loo. 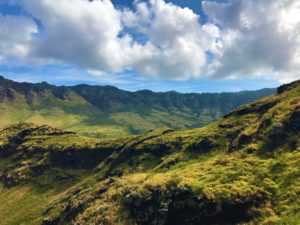 When you could just take a stroll in the park.

And then you’d have to move quick,

To avoid being trapped in the dark. 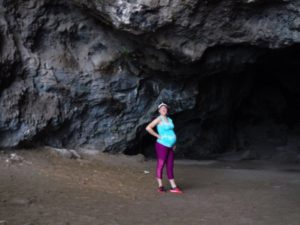 When you could stay in bed watching Netflix.

Your water could break,

and then there’s those darn braxton hicks! 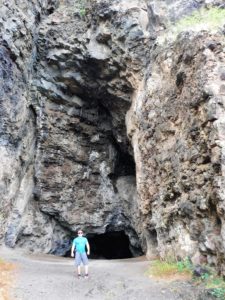 Thanks for visiting Big John’s Adventures in Travel . I hope you learned some valuable lessons as to why one should never go caving with a bun in the oven. Whether with child or not, feel free to explore more of my site.

The Aboriginals believed that if you ever dream about getting attacked by a kangaroo then your reputation is in great peril.  I thought about that before deciding to tell this story; but since I lost my reputation after making out with this girl named Porkchop in the eleventh grade, I think this one can be safely told. 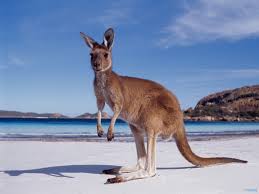 Awhile back, Rebecca and I were feeling rather adventurous so we decided to go to Saskatoon Restaurant for some wild and exotic game. Saskatoon is an amazing culinary emprise where any manner of fowl or beast is afforded an equal opportunity to make an appearance on your dinner plate.

On this night, Rebecca had a hankering for grilled ostrich and I decided to roll the dice and just order the kangaroo. For those of you that have never sampled marsupial meat, it has a very distinct flavor. I guess if I had to describe it, I would say it tastes like an entire combination of my least favorite things.  Frankly, I’d compare it to beef liver, black licorice, and the sweat-soaked end of a salty boomerang. What’s that? You’ve never tasted the sweaty end of a boomerang? Well greenhorn, it’s quite obvious then that you’ve never hunted rabid wombats in the Tasmanian region of the Aussie bush.

Anyway, I didn’t want to offend the chef so I forced a smile and managed to choke it all down with a sweet potato and a couple bottles of beer. To tell you the truth, I surprisingly felt pretty good after my meal … sort of felt all hoppy inside.

Well, I probably shouldn’t have went to sleep directly after eating because I had the craziest of dreams. This wasn’t one of those dreams that you have in grade school;  the one where you make it all the way down the school halls before discovering you’re not wearing any pants. This wasn’t one of those dreams where you’re dressing in the gym locker room, only to discover you put your underwear on backwards and you’re really not dreaming after all. No, this was worse than all of that. This was one of those dreams that can really scare the Bejesus out of a person without even knowing who Bejesus is! 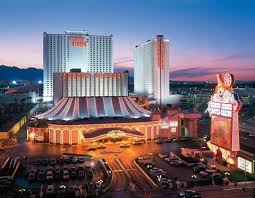 In my dream I was at the legendary Circus Circus in lucky Las Vegas, Nevada. Right away, I sort of knew I was dreaming because things weren’t at all like they were supposed to be. I wasn’t cursing at the slots, cheating my hand at poker, or doing any of those  super fun things that people  suffering from gambling addiction would normally do.  Instead, I was standing in a corner of a boxing ring on the upper floor of the casino with jeering spectators surrounded me on every side. The air was thick with stale smoke and everyone seemed to be staring, even laughing at me.

I know must have looked bat-poop crazy and the apprehension I felt at that moment was all but driving me insane. I was sporting these ridiculous silk shorts, wearing an over-sized pair of red boxing gloves, and had a mouth guard jammed between my teeth.  The bell sounded and my head began to swim. I couldn’t see my opponent when he first entered the ring but the crowd heralded him in with a deafening roar. The spotlight  completely blinding me and I remember this overwhelming feeling of being way to  low to the floor.  At that moment, everyone and everything just seemed so much taller than me. 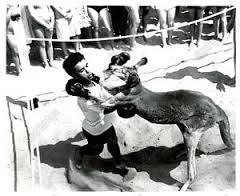 Now I don’t claim to know who would win in a real fight between a midget and a kangaroo; but in my dream that jumping joey really bestowed upon  me one bonanza-sized beat down. Don’t let ‘em fool you, those things have a ferocious left hook! I wasn’t in the ring but ninety seconds when that rascal TKO’d me back to the real world! I went toe to toe with a kangaroo and didn’t make it a single round!

About a week later, Rebecca and I drove past Saskatoon’s Restaurant indiscriminately searching for a bite to eat.  She asked me if I would ever consider taking my chances again with another kangaroo. The mere thought of it made my jaw ache. I went home that night and settled on a  simple can of chicken-noodle soup. 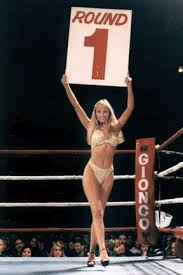 There seems to be a lot of talk these days about bucket lists. So much in fact, Jack Nicholson and Morgan Freeman made a movie titled just that – The Bucket List.  If you haven’t seen the 2007 movie, there are a few redeeming moments. I’m just not sure there were enough memorable scenes to make two hours with your butt planted on a couch worthwhile.

Travel-related blogs almost always contain at least one article about bucket lists. It’s all the rage.  What travel experiences or achievements do I hope to accomplish before I meet my maker?  What is my bucket list? I can’t deny that it all makes for a very interesting and compelling topic. I can’t ignore that a bucket list embodies the very essence of travel and adventure.  Despite all of this, there’s something about publically creating a bucket list that makes me feel… what’s the word… entitled?

Whoa! Calm down!  I understand how hypocritical I must have just sounded.  Please, before you going throwing Big John’s Adventures in Travel off a cliff with that high-end mobile device attached, allow me to first explain myself.

I’m a middle-class American male and my bucket list is as follows:

•ride a bull in Fort Worth

•hit a jackpot in Vegas.

With my bucket list, I just said so much more about where I come from than where I’m going. My desire to ride a bull tells the reader I come from a culture that values the thrill-seeker and adrenaline junky. My hope to one day ski the Swiss Alps tells the reader that my country affords me the lifestyle to ski recreationally and to freely travel abroad. My wish to hit a jackpot in Vegas says that I have the luxury of gambling and spending money haphazardly.

Now, let’s pretend I’m a peasant in a farming village of North Korea. My bucket list is as follows:

• see my mother in the South

• buy my grandson a bicycle.

With this bucket list, the reader learns that I live on a meager diet consisting of little meat.  I’ve been separated most of my life from close family members and my government won’t allow me to freely move outside its confining border. My financial state is such that my life savings would be gladly set aside to purchase my grandson a bicycle.

It puts an entirely new perspective on bucket lists, doesn’t it? But is creating a bucket list wrong or just too damn self-centered? I don’t think so, or at least it doesn’t have to be. To dream is to hope and to hope is to live.  A bucket list is just that, it is hope for the future.  I’ve only recently come to realize that my bucket list always seemed so wrong because I was filling it with the wrong types of things. In the end, it’s not about what I’ve accomplished for myself that will have given value to my life. On the contrary, my life will have been of value for every experience or accomplishment I’ve made towards helping others.

It is for this reason, Big John has devised new rules for creating his bucket list. For every self-serving goal or experience I place on that list, I will add two  deeds or actions that might dry a few tears for someone else.  I will call it my Two Tears in a Bucket List.

Big John’s Two Tears in a Bucket (amended bucket) List is as follows: 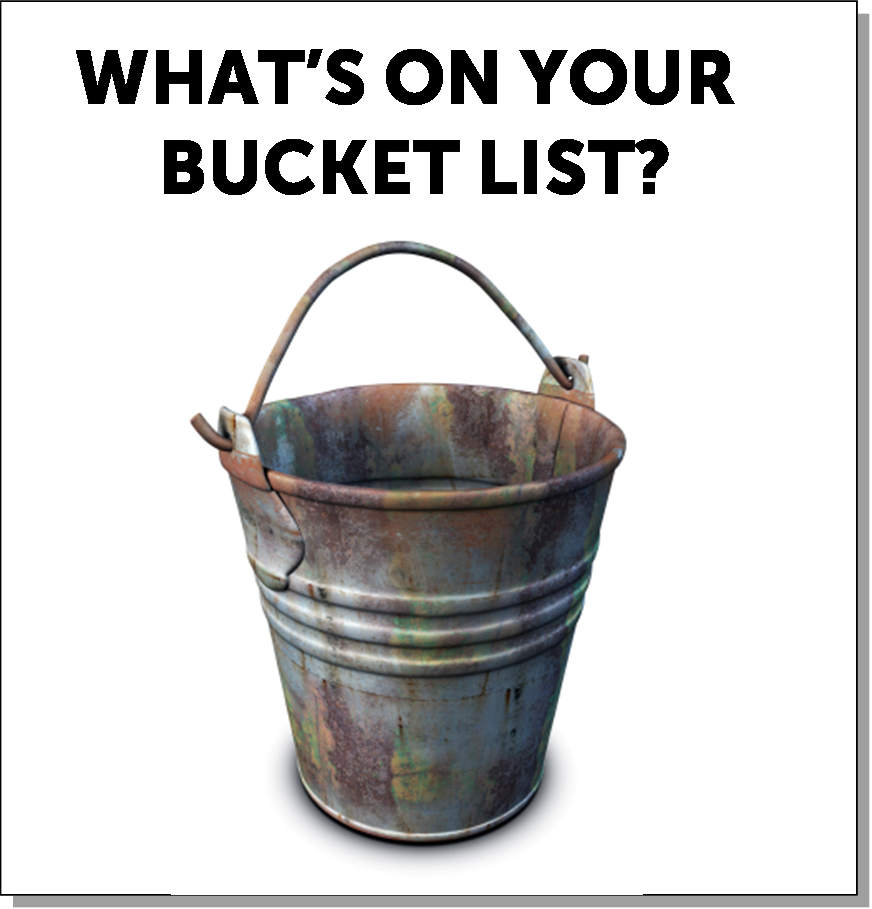 Whether you’re a returning visitor to my site or this is your very first visit, I certainly hoped you enjoyed my article. Before you leave, please post a comment and tell me all about your bucket list. Feel free to explore other areas of my blog and show some love on social media.


Posted in Scattered Thoughts and tagged in a bucket list by Big John with 4 comments.