I was deep inside the valley of Waimea and beads of sweat had begun streaming down my brow. I meticulously plotted my next action. If I moved diagonally to my right, I could capture my opponent’s stone and land in a spot not threatened by any of his forward-moving advances. I was running short on options at this point in the game, so this move just had to work. By making this play, I would brilliantly force him into a corner. From that point on, he would be playing purely from a defensive posture. I would have him tight against the ropes and victory, along with that sweet taste of freedom, would finally be in my grasp! 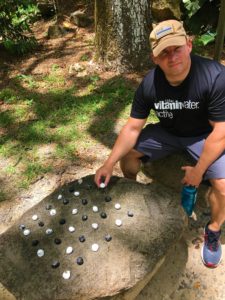 Big John keeps his poker face as he plays a very deadly game of checkers.

With a trembling hand, I gingerly lifted my white coral rock from the slab. I hesitated before moving, just long enough to steady myself and peer directly into his sinister eyes. I needed to witness the humiliation on his face as his lowliest captive beat him at his very own game. I wanted to observe his complete and utter shame as the village’s waterboy spanked him in front of every single member of the tribe. I would make him sorry…

sorry he ever took me prisoner; sorry he made me haul water down from Holikamoli mountain during the hottest part of each day; sorry he made me dance in that scratchy grass skirt and coconut bra every night, just to make the grandmothers laugh…

Oh yes, he would be sorry! 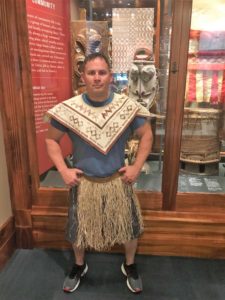 Back during my dancing days (I’m really not proud of this).

My opponent met my gaze and our eyes locked for what seemed an eternity. In a single strategical hop, I bounded over his small piece of black lava rock and then gleefully removed it from the board. What was that? Did I detect a bit of fear in those dark, mischievous eyes? Actually, I didn’t observe anything like that. Shifting rearward in his seat, the powerful man threw back his shoulders and broke out in a bellowing laugh. He then picked up one his pieces positioned just behind mine, curled his upper lip, and swiftly hopped over all of the chunks of white coral remaining on the board.

“Hey, you can’t move backwards!” I protested. “I never kinged you!”

“Can’t I?” he replied. “I didn’t need you to king me. I have been king of this village long before you ever arrived”.

As much as I hated to admit it, I really couldn’t argue with the man’s superb logic. King Millivinilli most certainly was the king of the village, which meant I was most certainly playing by the king’s rules.  The established terms of King Millivinilli’s game of checkers were very deadly, albeit rather simple ones. Unbeknownst to many, the people living in Waimea Valley have a long-standing tradition that goes back hundreds of years. Whenever one of their captives loses his usefulness, or entertainment value, he is forced to play the king in a high-stakes game of checkers. If the captive wins the game, then he also wins his freedom. If he loses the game… well, then that poor soul also loses his life.

So there I was, blind-folded, gagged and hog-tied to a pole like the main attraction at a Friday-night luau. With torches lit and drums-a-beating, the long procession of villagers began careening up the winding path towards the top of fiery Mount Chilichanga.  With each step carrying me ever closer to the volcano’s mouth, the heated air became more and more stifling. I could scarcely breath any longer. I felt myself drifting in and out of consciousness.  Was this really the end? 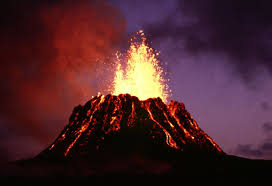 Will Big John face an agonizing death by being cast into the mouth of Mount Chilichanga? Will he fool the King and completely turn the tables around? You’ll just have to keep reading to find out more!

Having never really been a fan of human sacrifices, especially when they involve me plunging headlong into a lava pool, I had mere seconds to devise a plan of escape. As fate would have it, there was just one more trick concealed inside of my trusty little…

Okay… Okay, I am sorry but I’m going to have to stop this story right here. As some of you may already know, there aren’t really any active volcanos anywhere near Waimea Valley. Admittingly, I made that part of the story up, but the rest is pretty much factual. To be completely honest with you, Rebecca said she wasn’t going to let me post any of these pictures if she caught me so-called “bending the truth” anymore.

The truth is Rebecca doesn’t really even know the entire story. Honestly, she has no idea what even happened here.  As I was falling victim to the crime of the century, all she could worry about was if the foodtruck would still be selling kalua pork when we finished the hike. Yes, she did enter into Waimea Valley with me, and she did accompany me on most of the trail towards the falls; however, she missed a whole lot of very important events along the way. 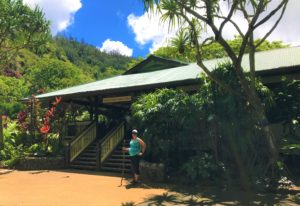 As is evident from the picture above, Rebecca did enter into Waimea Valley with me. What that picture doesn’t show, nor is it revealed in any of the other pictures, was just how distracted Rebecca was during our entire hike towards the falls. 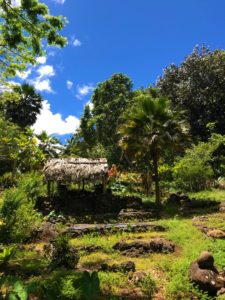 I captured this photo when I first stumbled into King Millivinilli’s village. Rebecca wasn’t with me at the time because, as expected with someone so great with child, she had to walk back to the visitor’s center to use the potty. 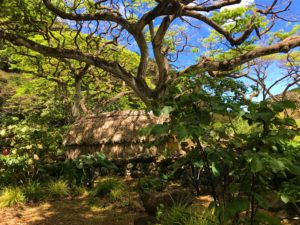 Rebecca still wasn’t anywhere nearby when King Millivinilli, along with fifty of his men, sprang from this hut and violently captured me at the tip of their spears. 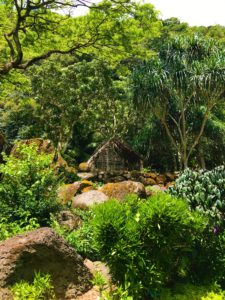 As you can clearly see here, Rebecca was still nowhere in the vicinity when the king had me bound with ropes and dragged over those large boulders towards my bamboo prison. 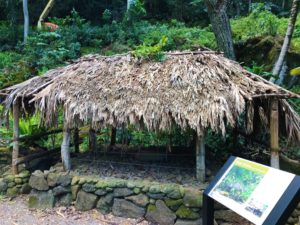 Rebecca may have reached the village by the time this picture was taken. However, she was dealing with a melting ice cream sandwich so she definitely was oblivious to any of her surroundings. 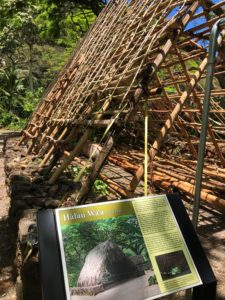 This is just a picture of a hut where King Millivinilli’s men made all of their canoes. There was really nothing nefarious to see here, I think we can move on. 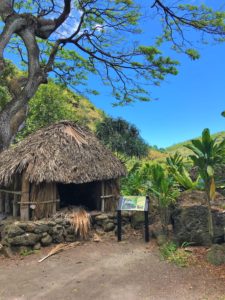 Aha! This is the hut where the king kept me captive. If the camera was of better quality and the picture wasn’t so dark, you would clearly see me tied to the center pole inside. The only thing you wouldn’t see in this picture is Rebecca, because once again, she just happened to be nowhere in sight! 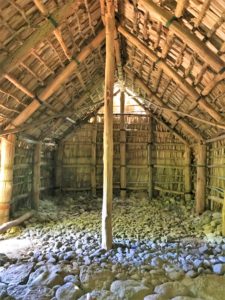 A picture of Big John’s former prison (after making his escape). 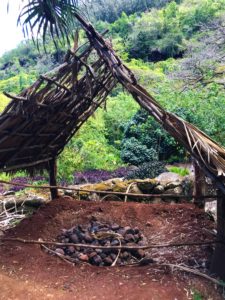 It was near this reprehensible spot that I was first made to dance for the grandmothers (I guess Rebecca missed all of that too).

Look I can go on and on, displaying every single graphic and disturbing photo chronicling my time spent here in captivity. But for what purpose? I think by now, my readers can clearly see that something very ugly and very sinister went down here in the valley. As far as Rebecca is concerned, we will just leave her clinging to her false sense of security. 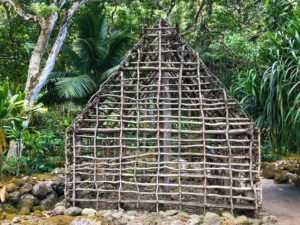 This was the very last picture I took as I fled from that ancient village. I am not ashamed to say it, that even after all this time, the place still gives me nightmares.  I finally located Rebecca just a few hundred feet up the trail. She had been chasing a rainbow and some Kamahameha butterflies. 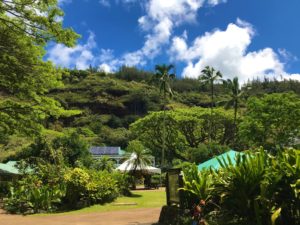 After making my harrowing escape, (the details of which I may later disclose in the absence of any skeptics), the remainder of our trek to Waimea Falls was peaceful and uneventful. 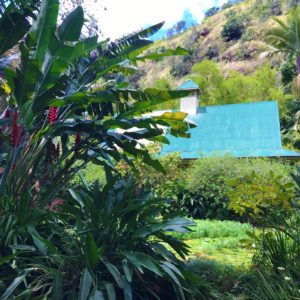 Along the way we viewed alluring red flowers blooming amongst the ferns. 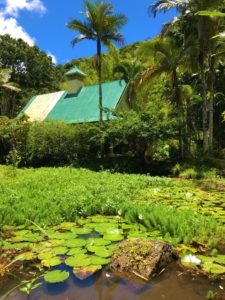 We gazed across a lively pond teeming with lilly pads. 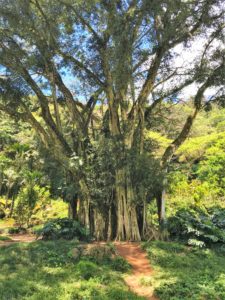 We walked under the boughs of a great banyan tree and found some relief in the shade. 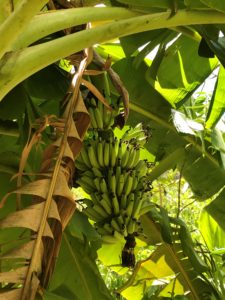 Along the way, we observed bunches of bananas ripening in a tree. 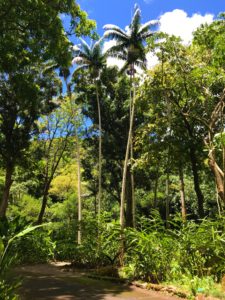 We saw palms that stood over the jungle like the necks of great dinosaurs. 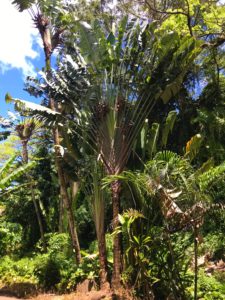 Along the way we saw other great palms with branches that spread out like magnificent fans. 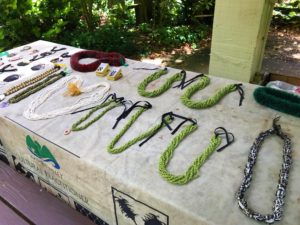 We even encountered a man who could skillfully fashion select pieces of God’s creation into beautiful leis. 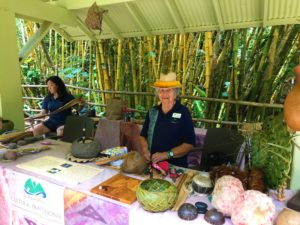 Near the end of our trail, we encountered two women weaving some lovely baskets from the nearby reeds. 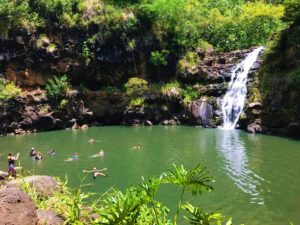 During our trek through Waimea Valley, we experienced so much more than most could ever imagine.  Since Rebecca would unequivocally deny much of the horrors the beseiged me here that day, I will leave you to remember the pictures we took of the more pleasant stuff along the way. However, should you feel daring enough to explore more of my mishaps and unmentionable escapades, please visit my site under the category: Tall Tales and Big Fish Stories. 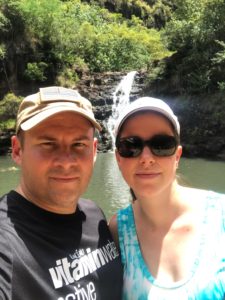 Thank you for visiting Big John’s Adventures in Travel! I hope this post inspired you to pack those bags and set out on an adventure all of your own making.