Mar 21st Diary of a Higgins Boat Sailor in the Pacific 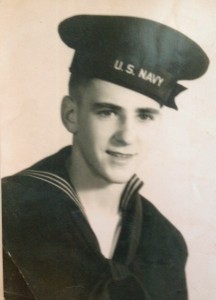 Robert (R.C.) Triebull, a Higgins Boat Sailor in the Pacific

When one thinks of travel and adventure, a pleasant and well-planned vacation most often comes to mind. There are times, however, when a person is thrown into the midst of an epic adventure that becomes both unpleasant and entirely unpredictable. When speaking of these journeys, there are none more honorable than those enterprises of selfless service where life and liberty hangs precariously in the balance.

In 1942, the entire world was at war. My grandfather, Robert (R.C.) Triebull, answered his country’s call and reported to his local recruiter in Cicero, Illinois for enlistment in the Naval reserves. Though Robert is no longer here to tell his story, he leaves behind a diary to offer a mere snapshot of that experience. There are countless veterans who have proudly served this country since its founding; this is just one sailor’s legacy. 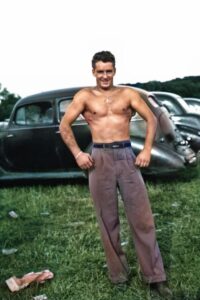 Robert Triebull strikes a pose before going off to war. 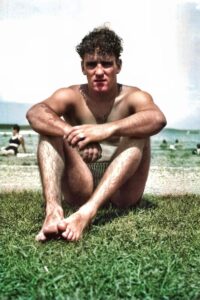 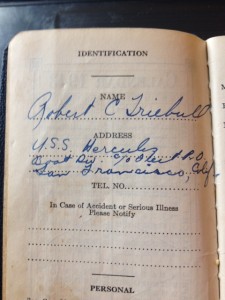 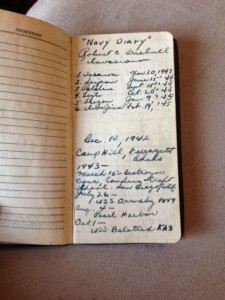 RobertTriebull was one of 293,000 sailors who attended boot camp in Camp Farragut, Idaho during its 30 short months of existence. Camp Farragut was established as a naval training center in September of 1942. Robert reported there as a fresh recruit on December 10, 1942. 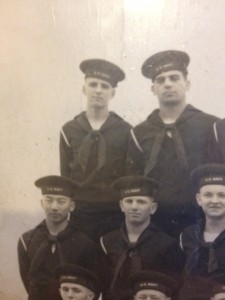 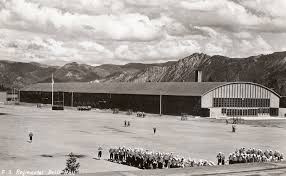 A panoramic view of the Bitterroot Mountain range in the backdrop of Camp Farragut, Idaho. 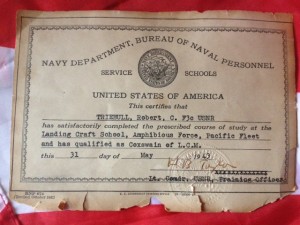 It was off the sunny San Diego shores that Robert learned the crucial skills needed to carry US Marines to the hostile beaches of the Pacific campaign. 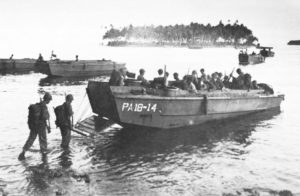 Upon completion of Landing Craft School, my grandfather boarded the USS Ormsby (PA49) on July 26, 1943 and landed in Pearl Harbor, HI on August 4. 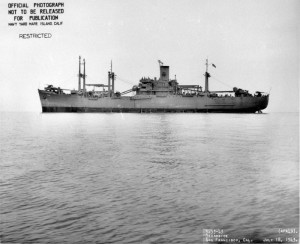 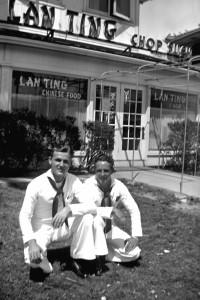 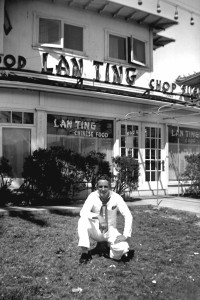 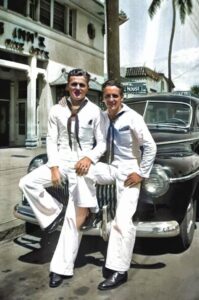 These two Higgins boat sailors just palin’ around in the future Aloha State.

On October 1, 1943, Robert Triebull got underway aboard the USS Bellatrix (KA-3) 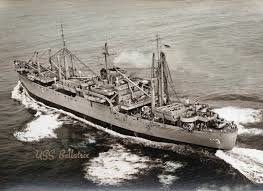 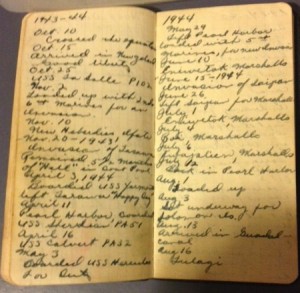 May 3   Boarded USS Hercules for duty

July 12   Back in Pearl Harbor

Aug 3   Got underway for Solomon Is. 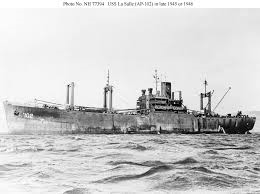 On October 25, 1944, after enjoying some good liberty in Wellington, New Zealand, Robert Triebull boarded the USS La Salle  with the 2nd & 6th Marines and prepared for the invasion of Tarawa.  As part of Task Force 53, the USS Lasalle steamed into the New Hebrides on November 10, where Robert conducted  landing boat exercises with marines in preparation for the assault on Tarawa.

On November 20, my grandfather participated in the bloody invasion of Tarawa by delivering the 2nd and 6th Marines to the beaches under the heavy  fire of 4,500 Japanese defenders. Unfortunately, on the day of the invasion, the tides fail to rise like normal and the majority of the Higgins boats got caught on the reefs stranding many marines 500 feet off shore. 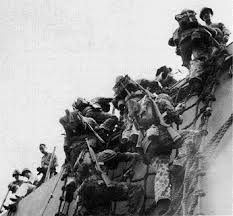 Marines climbing down ropes to an awaiting Higgins boat below during the invasion of Tarawa. 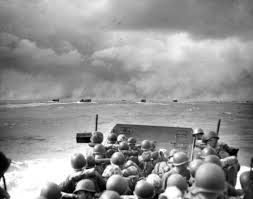 Loaded up with 2nd & 6th Marines, this is the view my grandfather would have beheld as he sped towards the exploding Tarawa beach on his Higgins boat .

After surviving the invasion, my grandfather remained on the island of Tarawa for what he referred to as “5  1/2 months of hell”. 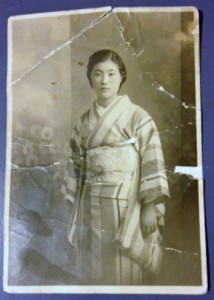 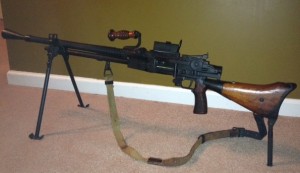 My grandfather brought this Japanese Type 99 Light Machine Gun home from the Pacific by allegedly concealing parts inside cigarette cartons and duffel bags.

On May 29, 1944,  Robert Triebull loaded up with the 5th Marines aboard the USS Hercules (AK-41) and set sail from Pearl Harbor – underway for a new invasion. 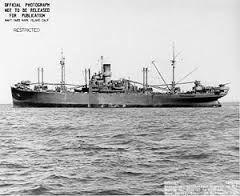 On June 15, 1944, Robert Triebull participated in the invasion of Saipan. During the onset of the invasion, Japanese warplanes made multiple attacks on his ship without causing any significant damage. 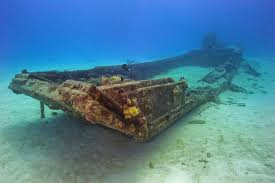 A sunken Higgins boat still rests on the ocean floor. It  took a direct hit during the Saipan Invasion on June 15, 1944. 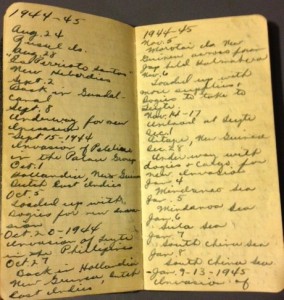 Oct. 5    Loaded up with doggies (army soldiers) for new invasion.

Nov. 5     Morotai Is.,  New Guinea across from Jap held Halmahera

Dec. 28    Underway with doggies and cargo for new invasion 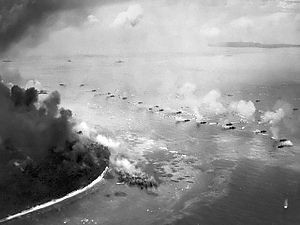 After offloading marines to shore during the assault on Peleliu, Robert Triebull  returned to the USS Hercules where he set sail for New Guinea.  In Hollandia, the USS Hercules was loaded up with army soldiers and new supplies in preparation for the next invasion.  On October 20, 1944 , my grandfather was amongst the group of sailors that carried General MacArthur to shore in the battle for Leyte Gulf. General MacArthur vowed to one day return to Leyte after suffering defeat there in 1942.  When the General had fled the Philippines nearly three years earlier, he had left behind nearly 90,000 malnourished and sickened American and Filipino soldiers. Those soldiers eventually surrendered to Japanese forces and were led on the infamous Bataan Death March. During the sea battle that ensued outside of Leyte in 1944, American sailors encountered Kamikaze pilots for the very first time. 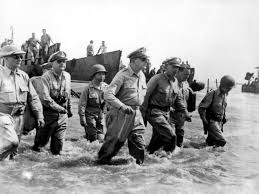 General MacArthur wades to shore in the invasion of Leyte, Philippines.

Higgins boats also carried General MacArthur to shore in Luzon  on January 9, 1945. The Allied victory in Luzon ended the Japanese occupation in the Philippines permanently. 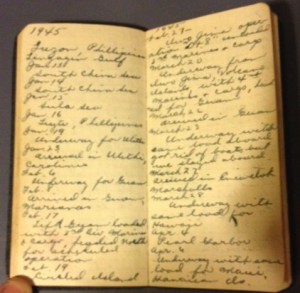 March 23    Underway with same load aboard, got rid of boats but we stayed aboard.

My grandfather carried the 3rd Marines to the shores of Iwo Jima on the eighth day of the invasion – February 27, 1945. He arrived the  same day the American flag was being  raised over Mount Suribachi. The historic photograph snapped that day would inspire a war-weary nation and forever symbolize the faithfulness and valor of the United States Marine Corps. 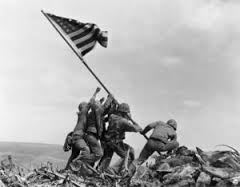 US Marines raise the Stars and Stripes over the volcanic island of Iwo Jima. 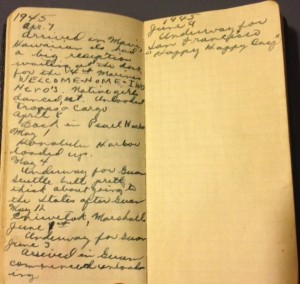 Apr. 7    Arrived in Maui, Hawaiian Is. had a big reception waiting at the dock for the 4th Marines. WELCOME HOME IWO HEROES. Native girls danced, ect. Unloaded troops and cargo

April 8    Back in Pearl Harbor

May 1    Honolulu Harbor loaded up.

May 4    Underway for Guam. Scuttle butt pretty thick about going to the States after Guam. 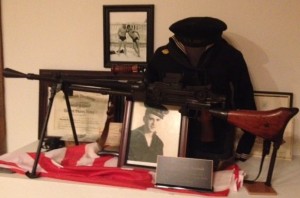 In memory of Robert Charles Triebull, US Navy – WWII

Whatever journey life takes us on, let’s not forget those that have gone before. Many have sacrificed greatly so our paths could become that much easier. Thank you for reading my article and I hope you visit my site again real soon. Feel free to explore other areas of my blog, post a comment, and share some love on social media.